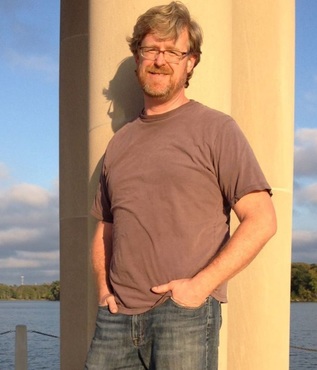 "Just Let Go" is based on the true story of Chris Williams, a father of four who was out driving his pregnant wife and three youngest kids when a 17-year-old drunk driver slammed  into the family's car — killing Williams' pregnant wife and two of his kids. The tragedy left Williams with the unbearable pain of learning to forgive the drunk driver who took away his happiness.

How did you prepare yourself, and how much time did you devote per day when it came to writing your first draft?
My entire life prepared me to write “Just Let Go."  It’s my belief that every ten or fifteen years or so, each of us has to face something traumatic in life, something similar to but maybe not as severe as what Chris Williams faced when his accident occurred.  In my life I had a father die young (so I was acquainted with death and how we react to it), I saw a brother electrocuted when I was six.  That brother had to relearn everything, how to walk and talk and eat (just as Chris William’s little boy has to relearn everything in our film).  I had a relative that hit a motorcyclist and the rider died.  All of these traumatic experiences prepared me to write the script.  I could imagine how Chris reacted and brought much of my life experiences into the script.

More immediately, I also prepared to write by making a life-long study of psychology.  I researched post-traumatic stress disorder, the stages of grief, and dealing with death.  I read Chris William’s private journals which he was generous enough to share.  In these more private writings, I learned more about the anger Chris felt towards a God that would take most of his family from him and how he dealt with that mental and spiritual challenge.

I spent about 6 hours a day thinking, writing, rewriting on and off for over a year.  I would take frequent naps and then imagine the film and wake and write what I saw in my head.  I think this lent the film a more dream-like quality in places and helped me distill Chris’ pain into images that allow the audience to vicariously experience some flashes of the hell Chris and many others feel when they lose loved-ones in traumatic deaths.

What was your biggest challenge in penning the script? Crafting compelling dialogue for the lead or coming up with visually engaging scenes to create an emotional pull in the story?
My biggest challenge in writing the script was probably giving the directors what they wanted.  I resisted their requests so much that I nearly got myself fired.  I had to learn to sublimate my ego and work within their budget and their overarching vision.  When I look back, this process of compromise and collaboration was fascinating and critical to the strength of the script.

I had no problem coming up with visual imagery, because I have actually seen many of the scenes in the film at other times in MY OWN life.
​I have a tendency to over-write dialogue, so I focused on cutting ALL the dialogue and redundancies I could, thinking “silent movie” and trying to do “less is more” and write more like a Haiku-style poetic dialogue.

I wanted to avoid the use of words specific to Chris William’s LDS vocabulary, which most Christians don’t understand.  For example, I opted to use “Preacher” instead of “Bishop” because, to most Christians, a “Bishop” is a leader of a large group of Catholics.  Chris was a leader in a smaller local congregation.  It was too hard to break out of the film and try to explain all the LDS terms that could arise so we used more generic words to discuss religion.  I wanted to focus less on Chris’ religion and more on Chris’ character arc, a more universal symbol of every man’s journey through pain.
​
It was very important for me to write some great scenes for the lead actor.  I wanted to let him get angry and explode; I wanted to include all sorts of challenges and “acting treats” so that a good actor would take the script on.  We didn’t know that Henry Ian Cusick was on board until well after the script was written, but I know from my wife, a great Chicago actress, Kymberly Mellen that all an actor really wants is a good script with solid business to sink their actor chops into.

How much leeway did you have in terms of fictionalizing the story?
Once I had virtually memorized Chris William’s life through his journals and books, I think he trusted me with some creative license.  I also shared my own traumatic life’s experiences with him so he knew I was “legit”.  I wanted the script to focus on the minutia of dealing with death. The specifics I brought to the script were often from MY life, but I would ask Chris “Did this ever happen to you too?”  I worked to create a distillation of his horrible experience into screen moments, images, and metaphors.  For example, when my dad died, I constantly found myself searching for anything Dad might have left behind.  I scrounged through all of his old suit pockets.  I held on to every object that reminded me of him.

I tried to get that longing for connections to lost loved ones, the search for signs, the wrestle with God into the script.  In the film, Chris lies down in his lost daughter’s bed.  As the lights fade, he looks up at the glowing stars stuck to the ceiling by his daughter.  In the stars: a hidden message…  “LOVE”.  These kinds of things happened to me in my life.  So I put them in the script.  In the end, we were making a poetic memory film, not a travelogue of simple sequential events.

How many drafts did you go through before you and the producers felt the script was ready for filming?
I lost count.  Some of my early drafts were so full of dark symbols and edgy brooding independent cinema ideas that they were way out of our budget and far too strange for a general audience. It took the first several drafts to get all my unbridled ideas out of my system.  Then I cut like a maniac.

​Ultimately, I really wrote three scripts for the directors, giving them endless choices.  We essentially took three scripts and crushed them down into one 112-page version that was rearranged more to the directors’ liking.  The directors wrote some scenes too, and I tried to incorporate them and adjust them to match my style so they wouldn’t stand out too much.  Compromise.  When it’s all done, the results of compromise and sublimating some ego have a 95% chance of providing a better script.

What’s your next project?
I’ve been talking to the directors Christopher S. Clark and Patrick Parker about another project.  I had a great time working with them.  I admire their ambition balanced by realism.  I am very comfortable telling them exactly what I think so I hope to keep thrashing scripts with them.  I'd like to get an agent too.  I think I’m at that plateau in my career, and I need someone to market me.  I am working up a novel right now.  It is an adaptation of a script I wrote a decade ago about a preacher that is “left behind” after the “rapture” and is angry and then finds a kid selling “insurance against the end times”.  ​