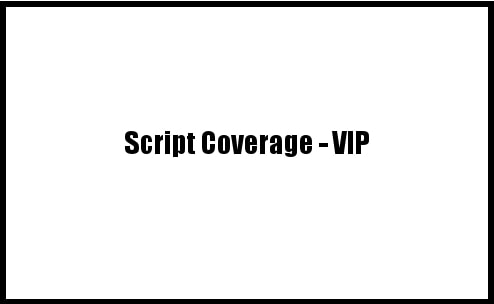 This script coverage service is for writers and filmmakers who want unfettered script feedback. If you seriously want to know whether the script you have in your hand is ready to be shown to a producer or ready for funding, get script coverage from us. Don't blindly show your script to a producer without knowing where your script stands. Get a professional opinion from us. And if you are an indie film producer, don't hastily put together a lookbook to seek funding from film investors without knowing if your script needs another round of rewriting. Investing in a film costs millions for investors. Let our script readers analyze your scripts and save you the agony of spending tens of millions of dollars making a film only to end up being a huge box-office flop. No amount of special effects on the movie screen can hold the audience's attention longer than a well-told story. Get your script analyzed and sharpen the story while you have the chance.

​Our readers will be frank in their feedback -- just the way it is in the film industry. If you are new to screenwriting, know that movie producers will not pretend to say your script is great when it truly isn't. Our script readers have written coverage for reputable literary agents and producers. If your script has a meandering storyline, they will bring it to your attention.

The only way to know where you stand in your storytelling skills as a screenwriter is by getting honest feedback. This script coverage service is for those who are thick-skinned and willing to know the truth. If you don't want to know the truth about your script, you are denying yourself a chance to become a better screenwriter. Only by knowing the weaknesses in your script will you be able to dramatically improve yourself and crush your competition.

Please be advised that script coverage is not the same as script notes. If you need in-depth feedback to help you brainstorm and do another round of script rewriting, be sure to visit our script notes page.​

Below are some of the areas that will be assessed in the script:

1. Does the story meander?

2. Do the characters serve the plot?

3. Does the story come to a satisfying conclusion?

What's included in the coverage report?

Email Your Script To: [email protected]

We will send you a confirmation email once your script has been scheduled for coverage.