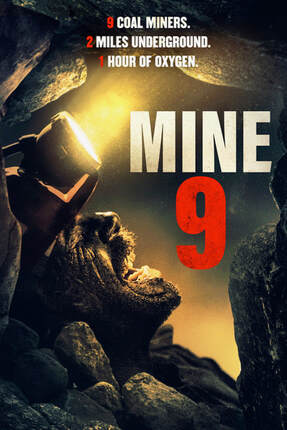 ​This month, I wanted to shine a spotlight on the world of indie filmmaking to share with new writers what it takes to pen a good script and make a movie. With that said, my guest is Eddie Mensore. He is the screenwriter, director and executive producer of the survival thriller "Mine 9." The movie stars Terry Serpico ("The Purge Election Year").,Kevin Sizemore ("Blackbear"), and Mark Ashworth. ("The Magnificent Seven").

Recently released on Netflix, "Mine 9" tells the story of nine Appalachian miners who must quickly find a way out--after a methane explosion leaves them trapped two miles underground with only 1 hour's worth of oxygen.

​The movie earned positive reviews from The Hollywood Reporter, RogerEbert.com, and Variety magazine. For those who haven't seen "Mine 9" yet, click here to view the trailer.
​​
Let's now dive into the interview...
​
​Firstly, what kind of messages do you want your audience to take away from watching “Mine 9”?
Besides simply wanting to make a good, claustrophobic thriller. I want people to see what these brave miners do for all over so we that can enjoy the basic comforts in life – like being able to flip on a light switch and have electricity. Miners put their lives on the line for all of us every day and sadly it mostly goes unnoticed. I want people to acknowledge their contribution to America ever since the industrial revolution. 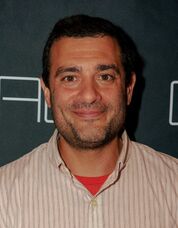 Screenwriter/Director/Executive Producer Eddie Mensore of "Mine 9."
What inspired you to write this script?
I am from West Virginia and coal mining is a way of life there. I simply wanted to explore what happens underground and give respect to the brave men and women miners. I wanted to entertain as well as make the miners proud.

About how many rewrites and year(s) did it take you to get the script ready for casting?
Nothing less than hundreds of drafts. I wrote my first draft back in 2003. It went through years of rewrites.

By 2012, the script was 110 pages, it got me a manager, named actors and producers attached, and we were being packaged at WMA (WME). I thought I hit the big time. In 2015, after three years of sitting the bench, attaching and losing talent, I packed up my bags and moved to Atlanta, Georgia, to make the film through hell or high water. In Georgia, over the course of two years, I kept rewriting every day to make the script as tight as can be. While rewriting, we built a set through a Home Depot credit card.

Shortly after, we raised a little more money which would realistically allow us to shoot a 73-page movie over 15 days. I picked my battles and cut the script to 73 pages. Sadly, I had to leave 37 pages out of the movie, but we got the movie made. In short, the script is never finished until you finish the final edit and exhibit your movie.

What advice can you give to new screenwriters who want their scripts to get the green light from producers but are reluctant to do rewrites based on the producers’ feedback?
I don’t believe in unicorns, and getting the green light by someone seems almost impossible. If it does happen, congratulations...You BETTER listen to those producers who green light you. They also have skin in the game. It is now their movie too. If someone wants to finance you, you better listen to their opinions. This is a team industry and the championship trophy is a “green light”.

As also the director of the movie, roughly how many actors did you have to audition to finally get “the one” actor, Terry Serpico, to play the lead character Zeke?
Zero. I saw Terry’s reel and immediately knew that he was my “Zeke”. We emailed his agent with the offer and they accepted it.
The other roles, we saw about 100 people for each role. There was never really any debate with any role. Once the audition happens and you fall in love with a performance, that actor immediately becomes the only person who can play the role.

The nine actors who played the coal miners were very convincing in their roles. How many weeks did you spend rehearsing the actors before filming on the set?
We only had a 15-day production schedule. There was zero money or time for rehearsal. However, about a month before filming, I took the main actors to the real coal mine in VA. Everyone went two miles underground with real coal miners and they got to ask questions, study the people they would be portraying.
As an Appalachian filmmaker, it is very important for my actors to play characters and not stereotypical caricatures.

If you could give one helpful advice on directing to a first-time director who’s preparing to direct his/her first feature film, what would it be?
Just go make it. Don’t wait on someone to green light you. Do what it takes to get it done. "Mine 9" is my second feature. My first, "The Deposition," was made for $15K. It turned out just fine, went to festivals, won some awards, got me a few writing jobs… and most importantly, I “got the monkey off my back”. I could actually say, “I made a feature film." Just go make it. It’s not as hard as your fears believe that it is.

The music in the underground coal mine scenes turned out to be nicely suspenseful. Can you talk a little bit about how you found your music composer Mauricio Yazigi?
Mauricio and I have known each other for years. This was our first time working together though. I knew that I wanted “coal mine sounds” not “score” to carry the movie. Being underground is terrifying enough with the massive machinery ripping into the earth, water drips, dead silence. Those real sounds created the landscape for the score and sound design. Mauricio worked hand-in-hand with our sound designer, Michael Hardman, to achieve the sounds for the film. It really was a wonderful partnership between them.

Producing a movie often requires getting multiple producers on board, what do you think are the key elements to maintaining a successful working relationship with other producers?
Every production is different. As long as everyone has the same end goal, and that you believe the producer will faithfully support your vision, then it should work out. You have to believe that it will and work hard together to make it happen. When your visions conflict, that’s when everything gets quite difficult. You must remember to listen to everyone and make them feel part of the team, not part of YOUR team. Making a movie is hard. When people can’t move in unison, it’s a tough go for any director.

To view some clips from "Mine 9," check out the below links: